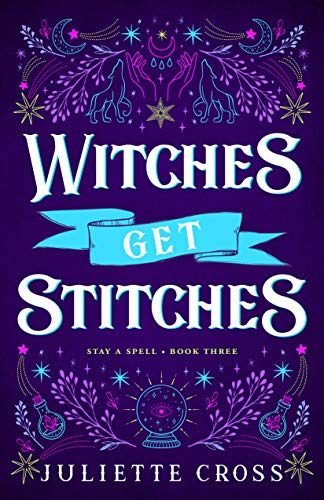 Get Juliette Cross' New Release Signed from Inkling Bookshop!*
The Release Date is JULY 20th! Books will only be send on release day.

Here is the Order Form!

Violet Savoie has a plan. A dream, rather. To open her own tattoo shop, which caters to supernaturals in need of permanent charms. As a powerful Seer, she has the potent magic to cast every kind of spell. Except the kind to give werewolves control over their beastly side. And her business partner Nico needs help in the worst kind of way.

Nico Cruz has a secret. A motive, rather. To subtly stalk and seduce Violet until she finally recognizes they are fated to be together. Ever since their heated encounter in Austin on New Year's Eve two years earlier, he's been dying to get his hands-and his tongue-back on her body. He knows a woman like Violet can't be courted in the usual way. Luckily, Nico has no scruples about misbehaving to get what he wants.

But when his former pack roams into town, and an old friend is far too interested in Violet, his focus shifts to the threat venturing into his territory. Nico may come across as the quiet, broody one, but the intruders are about to regret stepping foot in New Orleans. And when Violet goes missing, no charm or spell can keep Nico's wolf at bay.

*Juliette Cross made some awesome bookplates to sign and put in her books. They will come loose with the book and you can place her signature wherever you like :)