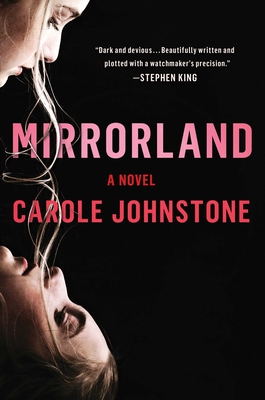 When your debut novel gets a cover blurb from none other than Stephen King, it’s safe to say that you have arrived.  Such is the case with Carole Johnstone, whose debut thriller Mirrorland attracted a tremendous amount of attention before its release, including that of the King of thrills and chills himself.  Remarkably, Mirrorland lives up to its hype.  With its devilish twists and turns and psychological trickery, it’s not a book you’ll put down easily, nor one that you’ll forget.

Cat and her twin sister El are mirror twins, perfectly identical. During their troubled childhood, they are inseparable, escaping from the horrors of the real world into their secret hideaway, Mirrorland.  Sometimes as clowns, sometimes pirates, always in one disguise or another, they build up an imaginary world where they are always together, protected from their irrational mother and their unpredictable grandfather.  But when a handsome boy named Ross moves in next door, a rift begins to form between them, one that grows through the tragedy that abruptly ends their childhood.  As they attempt to build new lives, far from the home they’ve always known, their differences grow until an unforgiveable betrayal finally separates them once and for all.

More than a decade later, Cat is unexpectedly pulled back into El’s orbit when word comes from Ross (now married to El) that El has disappeared in what appears to be a boating accident.  Cat abandons her crumbling life in LA and returns to the Scottish home of her childhood, now owned by Ross and El.  The house is full of memories, virtually unchanged by the intervening years and occupants.  And Mirrorland still stands, empty except for the echoes of the twins’ childhood.  As Cat is drawn further into her own past, and her feelings for Ross, inconsistencies appear in the accounts of El’s disappearance. To untangle the mystery and uncover the lies, Cat will have to confront the horror that ended her childhood, and the secrets locked away in her family’s home.  She survived the monsters that bayed outside the walls of Mirrorland once, but can she do it again?

Now, a personal confession: since the beginning of the pandemic, I’ve struggled to sit down and read a book.  I listen to countless audiobooks, usually while doing something else, but the low-level anxiety that’s always present at the back of mind makes it nearly impossible for me to focus on the words on the page, to lose myself in fiction the way I always could before.  Mirrorland was the first book in the better part of a year that grabbed me enough that I carried it with me, read it during meals, took it to bed at night.  Its pacing is exceptional; a steady thrum of “just one more page” played in my head whenever it was time for me to set the book down to return to the world.  Mirrorland is scary in the way that Hitchcock movies are scary, with a deep, slithering, existential dread that confounds all sense of reason.  If you enjoy a story that opens like a puzzle box and takes every page to piece back together, then you’ll love Mirrorland as much as I did.