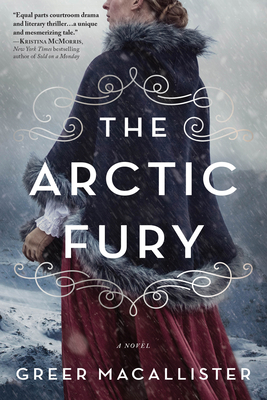 The Arctic Fury by Greer McCallister

Fact: In 1848 British explorer John Franklin and his expedition company of 129 men vanished into the frozen Arctic.

Fact: In the years following his disappearance his widow, Lady Jane Franklin devoted her life to searching for clues to his fate.

From these facts, Greer McCallister has created a tale of suspenseful adventure. McCallister says that she knew she wanted to write an empowering historical novel from a female point of view. She found Lady Jane’s obsession with finding her husband to be the kernel of truth she would use for her latest novel The Arctic Fury.  From this little seed of fact McCallister created a fresh, original tale that is suspenseful and captivating.

Virginia Reeve is right off  the Oregon Trail as a scout and is contacted by a shadowy figure named Brooks on  behalf of Lady Jane Franklin. The Lady prefers to remain anonymous until the expedition’s success. If the expedition is not successful, no mention will be made of its failure. Although circumstances are vague, Virginia is attracted to the idea of the adventure and agrees to be the expedition leader.

Mr. Brooks introduces her to the already chosen members of the diverse group of women that she will lead into the Arctic. Among them are a nurse, a translator, a mapmaker, a journalist, 2 widows of men on the original Franklin Expedition, and a sled dog tender. Above all, there is Caprice Collins, a contentious wealthy woman whose position on the expedition was secured by the financial backing provided by her influential family.

Brooks has arranged sea passage from Buffalo, New York to the upper Hudson Bay where the women will take to the ice in search of John Franklin’s lost, icebound ships. Plans are to conduct a summer’s search and return to the shores of the Hudson Bay where they will be transported back to American civilization.

Something must have gone terribly wrong on the Arctic ice. Upon their return to Boston, Virginia is immediately arrested for murder. It seems that not all the members of Lady Franklin’s expedition returned. In alternating chapters between Virginia’s murder trial and the story of their icy expedition the reader learns what really happened to the ill-fated Arctic enterprise.

Besides being a thrilling adventure and suspenseful courtroom drama, McCallister gives the reader strong and interesting women characters. These diverse women are bound by conditions of society  and by the relentless environment of the Arctic. They are forced to depend on each other and yet they each have secrets. Did someone’s secret follow them to the ice? Can we outrun our pasts? How important is reputation? Can friendships forged in extreme circumstances survive the return to normalcy?