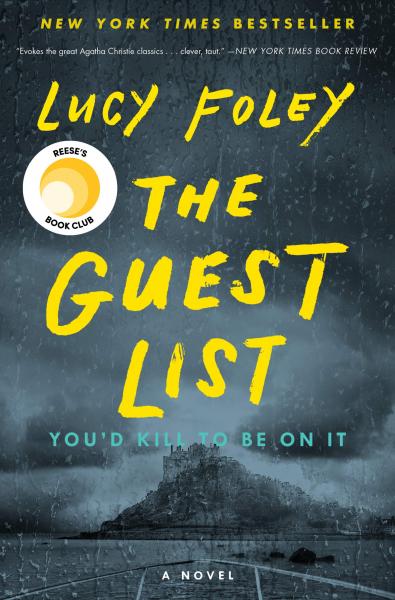 The Guest List's setting is quite atmospheric.  It is on a dangerous bluff and the weather is very stormy.  All of this sets the scene for the perfect mystery.  The island is only accessible by boat or ferry.  The internet and power are both unreliable.

As the story begins. all of the characters seem open and happy to be celebrating the wedding.  But, as time goes on it becomes obvious that each person has a complaint and is not as happy as they seemed to be.  The book is brimming with lies and secrets about  unfortunate past events.

It is important for the reader that the author doesn't tell us all the facts as the story unfolds.  The author needn't lie to the reader, just don't reveal everything.   Another Lucy Foley novel, The Hunting Party is also a fun mystery. It's about a group of Oxford friends who are invited to spend the Christmas holidays at a remote (again, a necessity in a British mystery) Scottish estate.  It is a great read for mystery readers that like Christmas settings in their mystery.  The Hunting Party  was written in a similar style as The Guest List.  Each chapter is told from a different character's point of view.  Both novels keep the reader on her toes.  The time frame skips around from the present to the past and back and forth again as each separate character tells us his story.  Like Christie's mysteries, Lucy Foley's characters each have a reason to want the victim dead.  Not only could any of the characters be guilty, but the reader doesn't even know who the murdered victim is until we reach the closing chapters of the book.  Foley is very good at creating characters who aren't as they seemed to be at first.

Among the characters in the book are the groom's fellow school mates that attended the same all-boy school together.  Some of their school  pranks were terrifying and are best kept secret.  So this isn't exactly a "British cozy" mystery.  There is a little bit of William Golding's Lord of the Flies in it also.  Reading The Guest List is so enjoyable  because the plot keeps growing, and the characters  open up to the reader as the story develops.

Lucy Foley is a skilled mystery writer and is sure to keep the reader in suspense until the very end.  The Guest List and Foley's earlier book, The Hunting Party are both great winter mysteries.