Review: Where the Crawdads Sing by Delia Owens 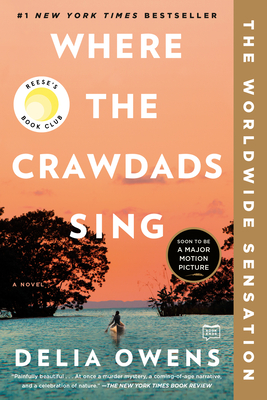 Where the Crawdads Sing was originally published in 2018. It was on the bestseller list for over a year.  The book was very popular with both women and men because of Owens' universal themes.  The book takes place beginning in the 1960s, in a small North Carolina coastal town named Barkley Cove.  The central character is named Kya Clark.  Because she lives alone in a marsh, the town's people call her Marsh Girl.

Maybe you have already seen the trailers for the soon to be released movie of the book.  The trailers I've seen are about a murder mystery and a trial in a marsh land.  There is so much more in the book.  It is a story of a very young Kya who is abandoned. by her mother who is fleeing an abusive and drunkard husband.   Kya's older siblings have already left the home, leaving six-year old Kya with their father, in a shack, in the North Carolina swamplands..  She cleans and cooks for her often absent father. Eventually, he doesn't return at all and she is left alone to raise herself.

Kya fishes for food and starts catching mussels and sells them to the local black family who run a fishing and supply store.  The man's name is  Jumpin'.  He and his wife help Kya with supplies, food, and some clothing from their church.   As Kya  gets older she become skilled at using her Pa's old boat and navigating the marsh waterways.  She observes the fish, birds and other wildlife in the marsh.  She  becomes a wildlife artist.  When Kya is a teen, she meets a local boy called Tate.  They become close and a sweet romance develops.  When Tate leaves for college, Kya waits for him. He doesn't come back.  Eventually, Kya meets and has an affair with a wealthy young man  named Chase who betrays her and breaks her heart.

Chase is killed by an unknown person and Kyra is arrested for the crime.  Kya is acquitted of the crime and eventually becomes a published nature artist with seven books to her name.  With her proceeds, she has her shack remodeled.and made livable.   Kya finds love and lives out a happy life in her beautiful marsh. There is a murder and a trial, but that is a small part of the book.  The main theme is Kya's coming of age story and her love of nature.   I hope the movie is as wonderful as Owen's book and that we get to see the beautiful natural setting that her book is filled with.