Review: Tanum: A Story of Bumping Lake and the William O. Douglas Wilderness 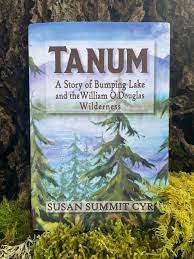 Sixty miles northwest of Yakima, in the heart of the William O. Douglas Wilderness lies Bumping Lake: picture north of Rimrock and east of Mt. Rainier on the map. Artist, biologist, and writer, Susan Summit Cyr’s book Tanum: A Story of Bumping Lake and the William O. Douglas Wilderness, tells the exciting and memorable story of the area’s human and natural history. (The lake was known to native peoples by various names, including Tanum, which means “home.”) Cyr has not only rigorously researched her first book, she spends summers at Normandie, the former Bumping Lake Resort’s lodge built in 1933.

Cyr alternates between last century’s history and her contemporary experiences there with her husband, Tom Cyr, and their family. She relates details of the many interests in the surrounding lands: hunters, miners, irrigation engineers, firefighters, construction crews, climbers, vacationers, and entrepreneurs.

Jack and Kitty Nelson are central to the book as the proprietors of the resort, arriving about a century ago to tend the new dam on Bumping River. They tucked themselves in with the plants and animals of their new home and soon were hosting guests–who often became friends–to their wilderness resort which they operated until Kitty’s death in 1960.

There’s so much to enjoy learning here. Cyr details the building of the dam; development of the resort; the long process of building Chinook Pass; and the establishment of Camp Fife.

Most interestingly is the recount of William O. Douglas’ boyhood visits with Jack Nelson and later retreats to Double K Ranch at nearby Goose Prairie for much-needed respite from his demanding work on the Supreme Court. His deep friendship with the ranch’s owners-turned-activists and his love for the wilderness he’d explored as a child, were critical to the eventual designation of the William O. Douglas Wilderness, ending clear-cutting on American and Nelson Ridges.

Delightfully, Tanum includes the chapter: “The Curious Side of Paradise.” Here we learn of various Sasquatch trackers, past and present, including Bob Gimlin himself. Remember the “UFO sightings” of 1947? These and several missing person mysteries leave us wondering whether all the fresh air and remoteness carry us away!

“The Two Sides of Dams,” delves into the issue of increased water storage versus habitat conservation. She explains what the Yakima Integrated Plan does and the costs it incurs, chiefly loss of an important natural area, should the expansion of Bumping Lake Dam come to be. Ultimately, she calls for measures to end laws which encourage the waste of scarce water and reduce demand. I found her intelligent and convincing on alternatives to “dam[ming] our way out of our looming water shortages.”

This issue connects well with “Fish and Other Neighbors,” especially her story, lovingly told, of watching for the few king salmon who manage to return to the dam each fall. This is fine nature writing in its facts and philosophy. Cyr is a companionable, resident observer of the web of life there on the banks of the Bumping River.

Cyr includes hand-drawn maps of the Bumping River Valley and surrounding wilderness areas. Chapter headings are enhanced with illustrations drawn by the author’s daughter, Kiwi Cyr. Many photos support the text. Don’t skip the extensive endnotes: these are full of great details!

Tanum is a northwest history which offers the reader much more than an account of the development of the Bumping River Valley. Susan Summit Cyr weaves her deep observations and family life in the wilderness along the way. She brings a deep appreciation for the awesome and irreplaceable diversity of life just up the road from here.