Review: Now is Not the Time to Panic by Kevin Wilson 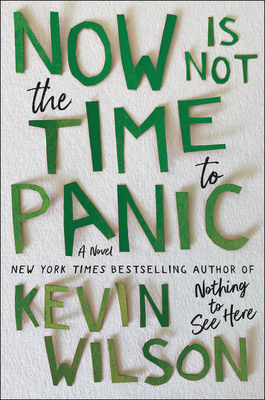 I’m admittedly not much of a literary fiction reader. I find that the story lines of literary fiction in comparison to the epics of fantasy, for some reason, make me more emotional. Maybe that’s just simply because literary fiction is quite a bit more relatable than worlds I’ll never experience, but either way, I tend to avoid them.

Something about Now is Not the Time to Panic stood out to me though, the premise of two teenage artists accidentally causing mass hysteria in the Satanic Panic-obsessed 1990s was alluring. The majority of the story follows 16-year-old Frankie, who is used to her humdrum Tennessee hometown when she meets Zeke, a goofy boy who’s new in town after being the one to discover his father had not one, but multiple girlfriends around the East Coast.

What transpires between the two is an unsuspecting not-quite-love-not-quite-friendship connection as they explore the city and their artistry together. The pair end up creating a piece of art that does what art sometimes does, influencing the masses beyond their control. Their art becomes its own event cemented in history as the Coalfield Panic of 1996.

That singular art piece also changes the trajectory of Zeke and Frankie as people. Which is why we find Frankie, twenty years later at the beginning of the novel, hoping to never be found again if only to bury the memory of that summer with Zeke forever. But, Frankie has been found by a journalist who has discovered her secret and wants her to speak about the phase of her life that she has since kept locked inside of her.

At first, I wasn’t sure how anonymous art could be so bad to cause Frankie to run away with so much dread. Then, I began to understand that the story was about much more than just creating anonymous art that causes ripples throughout the community.

Frankie and Zeke are two kids who are messily figuring out that when, with good intentions, we cause bad things to happen, the calamity that follows doesn’t have to mean imminent destruction. But, it’s difficult to rationalize that when both have just watched their entire lives get turned upside down by adults who were supposed to stabilize them.

Through surrounding panic, this story is about two teens who find each other within the uncertainty of their youth. Youthful angst isn’t for everyone, but Kevin Wilson does an exceptional job of masterfully gifting life lessons that extend beyond any set time frame to his readers.

By the time I set this novel down, I felt like I could spend hours thinking about the different interpretations of the characters, the subtle threads of their relationships, how it all ended, and discover a different aspect with each analysis. Those are my favorite kinds of books, the ones that make me see it and myself in a different light each time I revisit it.

Wilson’s new release is the perfect quick read for winter as we approach the new year, reconsidering who we are, where we’ve been and the direction we’re going.