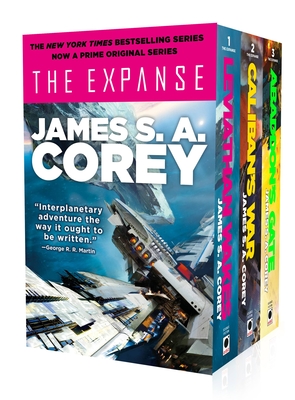 The Expanse Series began 10 years ago with Leviathan Wakes.  Eight novels later it concludes it’s run with Leviathan Falls just as Prime is releasing the final season of the TV adaptation.  By those measures it’s been a successful franchise.  Should you read it now that it’s finished?

The series is science fiction, but also a political drama dealing with the consequences of humans suddenly finding the technological remnants of a long-dead galaxy-spanning alien race.  This is the core premise of all nine books of the Expanse series.  How would humanity react finding alien technology for the first time?  How would our first interstellar forays go if we were using alien technology we didn’t understand in order to do it?

The story is told through the eyes of the crew of the space ship Rocinante, a set of humans that through stubbornness, dumb luck, moral conviction and a bit of talent manage to find themselves at the center of nine crises that alter the trajectory of humanity.  The peripheral characters own this series:  among them the tame psychopath mechanic Amos is a favorite in the novels (and the TV adaptation on Amazon Prime);  and Earth bureaucrat Chrisjen Avasarala who cusses like a sailor, her one unbreakable rule being that she won’t put children at risk.  Avasarala paid a political cost for that rule and feels she’s less likely to be seen as weak for it when she swears worse than the men.

The stakes in the series are always as high as they come.  The fate of humanity always hangs in the balance.  Despite that, it doesn’t feel campy or contrived.  Humans living in little metal bubbles hurling around a vacuum while tinkering with unfathomable alien technology should be riding a knife’s edge from disaster.

In summary, I loved the series.  It was great and I highly endorse it.  I wanted to take a moment though to discuss the merits of the TV adaptation alongside the books. The TV series gets the themes of the novels and that I feel is the most important part of any adaptation. The show makes changes to a few peripheral characters and storylines in the name of pacing but never messes with the primary plot points.  The final season is airing right now, and it’s looking like they won’t be able to cover the material from the final two books.  I can understand why they wouldn’t, the last books take place several decades in the future with the core crew as veterans on the edge of retirement.  I don’t mind this change because it makes the two IP’s fundamentally different.  You can finish the TV series and want to see where the author meant to take it from there and for that you can look to the books.  Enjoy both of them.  I certainly did.