Review: Empire of Ice and Stone by Buddy Levy 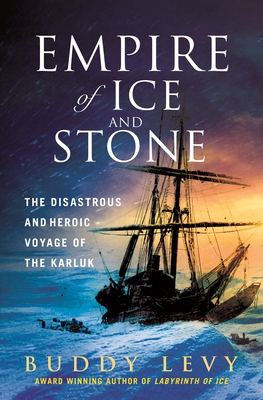 It’s frigid here in the Yakima Valley as I write this. Temperatures are expected to head into the single
digits just in time for Christmas. As I deal with the local cold snap, it gives me a newfound respect for the
turn-of-the-twentieth-century explorers who willingly braved far colder conditions in the Arctic and
Antarctic. Roald Amundsen, Robert Falcon Scott, Ernst Shackleton, these are the well-known names of
polar exploration.

A name you might be less familiar with in the area of polar explorers is that of Vilhjalmur Steffanson.
Steffanson—check out his Wikipedia article, it’s a wild ride. Steffanson and his crew set off aboard the
Karluk in 1913. The voyage largely ended in disaster and is the subject of “Empire of Ice and Stone” the
latest book from Washington State University English professor Buddy Levy. In the interest of full-
disclosure, Levy and I have intersected several times over the years. We both contributed chapters to a
WSU Press publication several years ago and have a peripheral connection via late WSU football coach
Mike Leach.
After the Karluk became ice-bound several weeks into the voyage, Steffanson and set out on a hunting
expedition. He never returned to the ship. Instead he reached land, gathered a new crew, and continued
exploring, seemingly unconcerned with the members of the Karluk still trapped in the Arctic.
Abandoned by Steffanson, it fell to Robert Bartlett, the ship’s captain, to take control of the expedition.
The ice eventually crushed the Karluk, and Bartlett and the crew had to trek across the Arctic in the
hopes of rescue. While multiple expedition members perished on the voyage, the entire party might
have perished had it not been for the extreme generosity and hospitality of the local Inuit peoples,
which Bartlett himself was quick to acknowledge. Eventually, Bartlett was able to organize a rescue
expedition. While initially hailed as a hero, he later faced censure from Canadian officials. Steffanson,
meanwhile, escaped any significant scrutiny and went on to have a successful career as an author and
public speaker.
It's an intriguing story, one which I was previously unfamiliar. “Empire of Ice and Stone” features a lot of
threads common in stories of polar exploration—the ego and hubris of humanity, the power and the
unforgiving nature of extreme environments, the timeless desire for discovery, glory, and fame, and the
fact that the real heroes of any tale are often not the ones who get credited.
It’s easy to recommend “Empire of Ice and Stone.” It’s an interesting read about a story that has not
been told to exhaustion and Levy is a skilled writer—the short chapters make the book quick easy to
pick up and read in short bursts, or longer ones. A cup of hot cocoa, a warm fire, and this book will have
you set for these cold winter days.