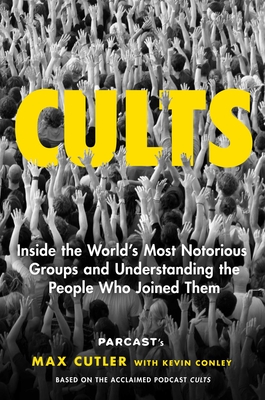 When thinking about buzz words, one that sticks out is “cults”. We use the word so often, whether or not we actually consider the meaning of the word. Describing books, movies, TV series’, bands, and their passionate followers so often are easily called “cult” followings. Sometimes the word is also used to describe a negative group following whose practices seem untrustworthy. But the reality of cults in their extreme existence is in fact very serious.

The podcast Cults on Spotify created by Parcast covers some of the most controversial groups throughout history. Some recent episodes cover The Ant Hill Kids, Buddhafield and The Moonies, all of which including explanations about the personalities of people who led these groups and those who joined. From this podcast and its success, the book Cults: Inside the World’s Most Notorious Groups and Understanding the People Who Joined Them was written.

The book covers some of the most wildly notorious cults such as Charles Manson and Jim Jones, to some lesser known, but still just as intriguing, Keith Raniere and Credonia Mwerinde. Some topics of the cults described in this book are shame, exploitation, megalomania, escape and denial of reality, with a various number of topics covered throughout each cult description.

Previously, I had read and listened to resources on Cult leaders and watched the occasional Netflix documentary, but this book differentiated from the usual media I intake in very distinct ways. It was more than just a narrative and description of the lives of cult leaders and descriptions of what took place, but also had a quality amount of focus on the lives of those who joined these groups. Considerably, the book was able to discuss the aspects of humanity we often wish we could avoid and understand how vulnerable groups may be convinced to join.

The book was not without its focus on the dark side of humanity and may not be for the faint of heart. Personally, while I was reading this, I got too creeped out being alone. But I also get easily scared when I’m reading or watching something, so definitely if you’re also in the same boat, this might be a book you should read in-between lighthearted movies or a fun game that can break the tension.

If you aren’t too easily creeped out by true crime stories, then this is a read for you. It combines accurate narratives with psychological and sociological contexts that create a very interesting and informational book. If you enjoy true crime books, documentaries and have a bit of a penchant for conspiracy theories as well as the dark side of humanity, then this book should be next on your list!