Review: Babel, Or the Necessity of Violence: An Arcane History of the Oxford Translator' Revolution, by R F Kuang 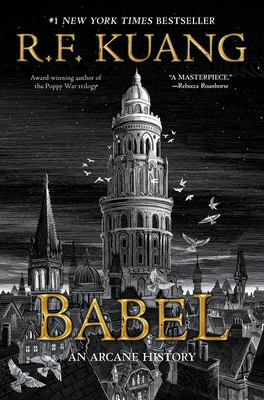 Babel, Or the Necessity of Violence: An Arcane History of the Oxford Translator' Revolution, or as we will call it for the remainder of this review- Babel, was nothing short of extraordinary.

Are you a lover of languages? There is no doubt in my mind that the author spent hours, days, months, if not years researching the many intricacies of languages and translation. I love the study of languages. I am fluent in two, and studied ancient Greek at university. So, needless to say, I was very impressed with this author's work and 'geeking out' with the author throughout the whole book. It was fascinating to say the least.

Babel is told almost exclusively from the perspective of its main character, Robin Swift, a Chinese Immigrant in England in the 1800s. The Empire depends on the translations of immigrants, done on silver, to stay rich and keep on working smoothly. Immigrant kids are brought by English sponsors to study at Babel in Oxford, England and eventually become the translators needed around the country and the globe to keep England rich and prospering. Throughout the entire book Robin must come to terms with the inequality and unfairness of this. He was taken to Babel without a choice, his mother died and his sponsor (who also happens to be his father but never acts as such) brings him to England, gives him all the commodities he never asked for but has grown to enjoy and appreciate. As he gets older, he has to decide if his love for studying languages and the comfortable life he has gotten used to is enough. If he can truly ignore all the suffering and pain caused to others and to his motherland for the riches of the English. His close friends, also brought to the country at a young age, must decide the same.

About halfway through, the story picks us and a little more action starts to take place. A sequence of events you do not see coming starts to unfold and it never stops surprising you, breaking your heart, and exciting you

Babel is passionate, heart breaking, and fascinating. Although it is classified as a fantasy book, it is not for the lovers of dragons and slayers, assassins and magicians... it is a slow-paced magnificent work on languages, on the magic of translation, and as the title suggests, on the apparent necessity of Violence.

Tony, another bookseller at Inklings adds:

"I think Babel resonates differently for different people.  For me, the draw was the Colonialist commentary.  How colonialism is the first cousin to racism but enjoys a better reputation is a major theme of Babel.  But there are others.  Anyone who speaks multiple languages will find intellectual candy in the Linguistic magic system.  If you are someone who finds difficult family dynamics interesting, you’ll have plenty to delve into in this book.  And if you are just fascinated with Oxford or Victorian England this book is yours."