Tanum: A Story of Bumping Lake and the William O.Douglas Wilderness

The story of the West is more than the tale of heroism and rugged individualism many believe it to be. It is also the tangled epic of chaotic water rights, special interest resource management, and the fight over both the pillage and preservation of the environment. This book is about place: a hidden, littleknown corner of Washington State that is the tale in a microcosm. The wilderness paradise around what is now Bumping Lake provided life and spiritual sustenance to generations of Native Americans and later, white settlers who made their home in one of America’s last frontiers.

Two of the newcomers, Jack and Kitty Nelson, settled on the lake’s shore and became the center of valley life in the first half of the 20th century. Around them swirled an incongruous mix of miners and trappers anxious to exploit and others eager to soak up the solitude and beauty of the mountains. A half a century later when the wild land was threatened, some of those visitors who had their environmental ethos shaped by the couple, became champions of the wilderness.

The most powerful of those was United States Supreme Court Justice William O. Douglas. He, along with other tough-as-nails conservationists, gathered in tiny Goose Prairie, population twelve, and changed the course of history as well as the map of Washington State. This history of Bumping Lake is the story of the true heroes of the West, without whom we might not have the forests, lakes, and rivers that make the Evergreen State what it is today. 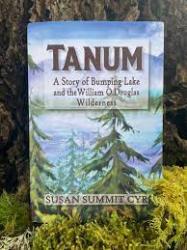