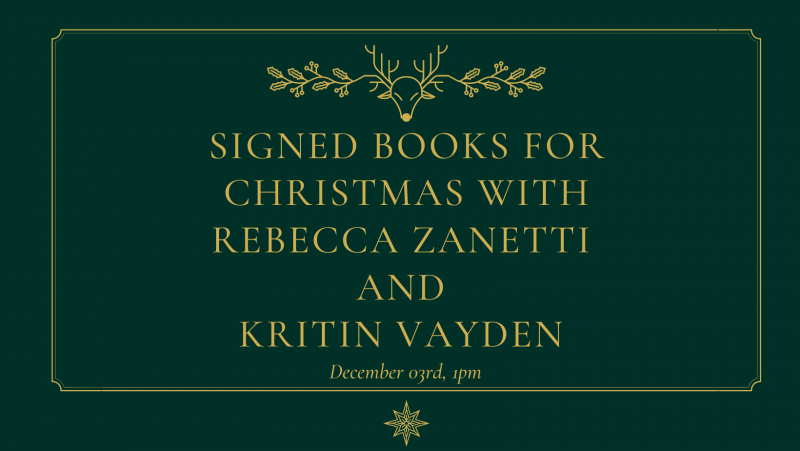 Join us this December 03rd for a Signing with Rebecca Zanetti & Kristin Vayden!

Can't attend? Order your signed copies online and we will ship it to you the Monday after the event.

Set against the atmospheric backdrop of rural Pacific Northwest, New York Times bestselling author Rebecca Zanetti’s thrilling suspense series follows FBI Special Agent Laurel Snow as she strives to navigate her complicated family life when her newly discovered sociopathic half-sister becomes the target of a dangerous killer. The Blacklist meets The Profiler meets Justified in this fast, page-turning thriller that will have readers guessing until the very end!

What do you do when a sociopath loves you? Rising star FBI profiler Laurel Snow is about to find out …

Calling Laurel Snow’s relationship with her newly discovered half-sister challenging is an understatement. Not only does Laurel suspect Abigail is behind the mysterious disappearance of their father, but her erratic behavior also makes life in Laurel’s small hometown interesting, to say the least. Still, when Abigail claims someone is now out to kill her, Laurel’s instinct to protect her sister goes into overdrive. Then things get even more dicey as dead bodies start turning up in the icy waters of the Sauk River and there’s only one connection among them: Abigail . . .

Having Fish and Wildlife Captain Huck Rivers bringing in those bodies with his dive team only complicates matters. Huck is as impulsive and fiery as Laurel is coolly analytical, which makes their alliance risky at best. But standing up to such a demonically brilliant killer is going to take all the help Laurel can get. Because Laurel’s attempt to save her troubled sister’s life might cost her own . . .

Fans of Bridgerton will fall in love with this fresh and evocative historical romance from Kristin Vayden. Get swept away to the bright society of Regency England in this beautiful romance featuring:

Lord Rowles Haywind has always shied away from the spotlight of the dukedom, worried it would bring too much attention to the family secret. Now that he is the new Duke, he has more responsibility than he ever dreamed of. He needs help, but he's not sure he can trust anyone enough. Until he reconnects with Lady Joan Morgan...

Lady Joan's penetrating insights reassure Rowles as no one ever has. But she has a secret of her own that would cause a terrible scandal. She longs to tell Rowles the truth about her work for the war office, but she's afraid it'll ruin the connection they've rekindled. But the longer she waits to tell him, the worse the outcome could be for them both once the truth is out...

You Can Hide (A Laurel Snow Thriller) (Mass Market)

You Can Run: A Gripping Novel of Suspense (A Laurel Snow Thriller #1) (Mass Market)